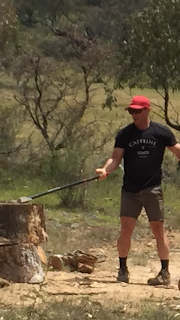 For my final blog of 2015 I’m delving into the realm of body language and breaking down an image I recently received. When coaching a movement we first get the basics right and that begins with the setup position of the movement.  We start at the ground and work our way up correcting any faults in the movement as they arise.

I’d like to run you through a picture from a coaches perspective and translate the body language I’m receiving, powerful stuff.

Stance- Don’t let the exaggerated pigeon toed position fool you.  Normally such a stance is associated with the unstable and bumbling image of a new born deer. I’m actually viewing a predator ready to rotate his hips with enough force to split logs with each stroke.
Dress- Clearly comfortable in a pair of triple tumble dried shorts accompanied with a spray on shirt and designer eye protection, he’s confident in his ability to tame the wood.
Gestures- The way he has his trusty tool extended and layed out on the unsuspecting log is not as creepy as it looks. If you consider his other arm (unfortunately out of shot) is outstretched creating the image of a ballroom dancer gracefully launching his partner into a spin. The synergy between man, tool and wood is a thing of beauty.
Head Position- His head is slightly tilted as he retrieves his hammer echoing his favourite movie star who he can’t stop talking about Chris Hemsworth. Uncanny resemblance.
Facial Expression- Although hard to see from the picture his lips are pursed and he is actually whistling, a telltale sign our woodsman is content with his task and in harmony with his surroundings.

Meal of the Day